Our latest prospective study, including samples from more than 12.000 pregnant women, published in Prenatal Diagnosis journal, demonstrated the clinical utility of PrenatalSAFE® Karyo test, reporting a significant higher sensitivity of PrenatalSAFE® Karyo test as compared with standard cfDNA screening for the detection of common aneuploidies (100% vs 92.64%, p<0.001). 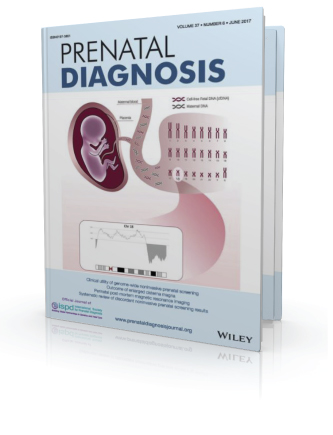 A publication of our latest paper titled “The Clinical Utility Of Genome-Wide Non Invasive Prenatal Screening”, has been published in Prenatal Diagnosis journal, one of the most known and prominent journals in prenatal diagnosis field.

Conventional cfDNA-based NIPT focuses on detection of common aneuploidies, leaving a gap of ˜17% of clinically relevant chromosomal abnormalities that would go undetected. Genome-wide NIPT would greatly expand the range of chromosomal rearrangements detectable, because it extends screening to include also rare autosomal trisomies and structural chromosome anomalies throughout the fetal genome. Such level of testing has the potential to improve overall pregnancy management, providing a significant higher sensitivity compared to standard screening.

In our study, we expanded standard cfDNA testing to cover the entire genome. We aimed to compare the performance of the two test, standard vs genome-wide cfDNA screening (PrenatalSAFE® Karyo) in a large general population of pregnant women in order to assess the clinical utility of the genome-wide screening.

The PrenatalSAFE® Karyo is a genome-wide cfDNA screening test that analyzes every chromosome in the genome, providing karyotype-level insight. Though not a fetal karyotype, it offers a level of information previously only available from a karyotype analysis. It provides information about gains or losses of chromosome material = 7 Mb across the genome.
A total of 12.114 pregnant women, undergoing conventional cfDNA-based NIPT for common fetal aneuploidy, agreed to extend the screening to genome-wide cfDNA analysis and were enrolled in the study.
Clinically relevant chromosomal abnormalities were detected in 169 (1.4%) pregnancies and confirmed by metaphase karyotyping or array-CGH following invasive prenatal diagnosis, 151 of which involved common aneuploidies, 10 were rare autosomal trisomies and 8 were segmental imbalances.

PrenatalSAFE® Karyo allowed identification of 18/169 (10.7%) clinically relevant chromosomal abnormalities, not detected by conventional cfDNA screening. Twelve (7.4%) of these, potentially resulting in the birth of babies with chromosomal anomalies, would have remained overlooked if only conventional NIPT had been performed. This resulted in a statistically significant higher sensitivity (100% vs 92.64%, p<0.001) than did standard screening for the detection of common aneuploidies. This was achieved without sacrificing the specificity of the test, that resulted very similar to that obtained with standard screening (99.87% vs 99.77%, p=0.064).

* Clinically relevant chromosomal abnormalities, not detected by conventional cfDNA screening, potentially resulting in the birth of babies with chromosomal anomalies, have been considered as false negative.
§ A P-value of less than 0.05 was considered to indicate statistical significance.

In conclusion, our study demonstrated the clinical utility of expanding NIPT to cover the entire genome. PrenatalSAFE® Karyo represents an improved screening tool for prenatal detection of chromosomal abnormalities, allowing identification of clinically relevant imbalances that are not detectable by conventional cfDNA screening. Genome-wide cfDNA analysis provides a significant higher sensitivity compared to standard screening while maintaining a high specificity. For more information on our study, we invite you in reading the original paper.